Historic Garden Week 2018
​
A slideshow of many of the arrangements created for Tour Day is below.
Below is a link to the Flickr page for Nancy Hann of Traveling with Purpose, showing more photos of the homes and sights on tour day.
Click here
Click here

Forty miles east of Richmond, West Point, founded by Captain John West in 1658, is nestled where the Pamunkey and Mattaponi Rivers form the York River.  By the late 1800s the town had become a fashionable vacation spot with a large hotel overlooking the rivers.  Steam boats from Baltimore brought goods and tourists to its ports while railroads connected it to Richmond.  Walking the cherry and pear tree lined streets though the residential and downtown areas with the stately Victorian architecture brings back images of those long ago days while a contemporary environmentally “green” house reminds us of our life today. 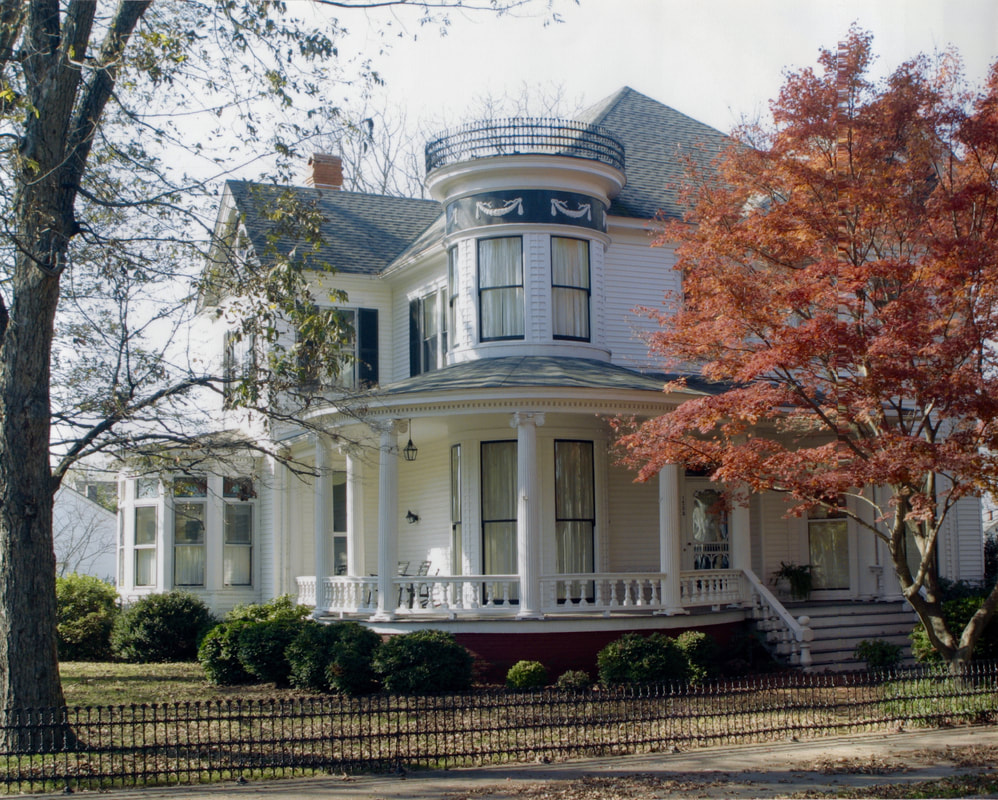 ​The fancy ironwork catches your eye at the Victorian house Samuel Bland built for his bride, Bessie Farinholt, in 1905.  It forms the fence surrounding the property inclosing 100 year old boxwoods, azaleas, dogwoods, red maple trees and pecan trees and also decorates the top of the turret.  The decorative touches continue into the home with the lacy fretwork in the central hallway, a two story turret, pocket doors, inlaid hardwood floors with different designs in each room, a white marble mantel and hearth in the living room, 12-foot ceilings, transoms, large bay windows, and stained glass.  Attention was made to restore many of the features to include the original light fixtures.  The current owners, the third generation of Blands to own the home, updated and enlarged the 1950s kitchen by incorporating a small back hall and breakfast room and adding a clever four sided grouping of cabinets surrounding an unused chimney.  Antiques, many of which are family pieces, can be found in each room throughout the house, with the most notable being the English china cabinet in the dining room.  The owner, an avid antique car collector and restorer, will have several cars from his collection on display. 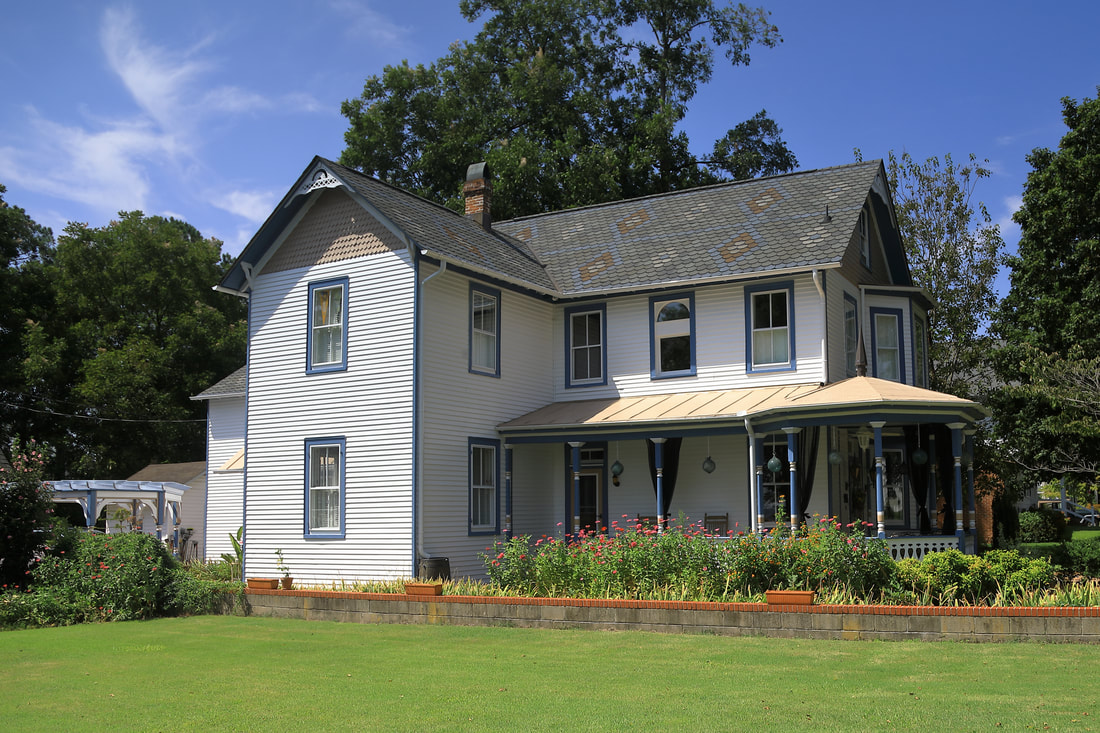 ​When walking up the flower lined sidewalk onto the wrap-around porch, one can glimpse the gardens, brick walks and hidden garden retreat surrounding Victorian Point, named in the 1960s when it served as a home and Bed and Breakfast. “We went through a major restoration and wanted to honor every family who lived here,” states the owner.  The thought and care that went into making this also her family home shows in every detail.  The home, built in 1905 by C. H. Denmeade, a Union soldier involved in the Peninsula Campaign who later moved to West Point, was purchased by the current owners in 2009.  They searched out trim to match the home’s original, had tiles made to match the ones that once surrounded the fireplace, replaced the picture molding found in the attic, spent three years looking for globes to fit a ceiling fixture, and personally hand-painted all the exterior trim.  The furniture is an eclectic mix from the Baltimore painted bench of the mid-1800s to mid-century modern, from the simple English pub table to the glamor of a Hollywood Regency chair and ottoman, and from the clean lines of 1960s curved sofa to the tall ornate gilt pier mirror. 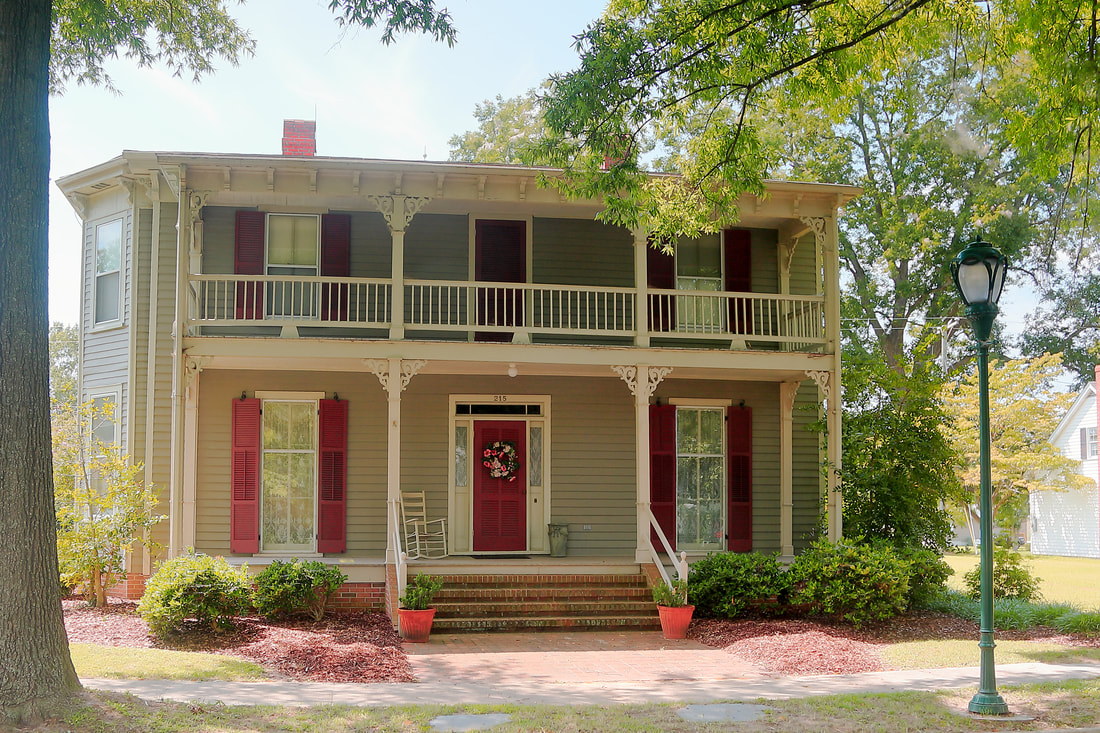 ​The house built by the Hughes family in 1884 on one of the highest points in the historic district of West Point was the perfect fit for the present owner who loves all things Victorian.  She and her husband have painstakingly restored the home with a lot of detail.  The light switches are replicas of the old push button ones only now one button controls a rheostat.  The wall paper throughout the house was made by a small Wisconsin company that reproduced vintage rolls of paper from ones discovered in a home there.  Dental instruments were used to clean about 20 coats of paint off a pink mantel.   “A lifetime of acquiring” has filled the house with extravagant intricately carved but livable furniture.  Most of the pieces have been purchased in Virginia and the newest, a rare Stella music box, has recently been restored to working order.  The couple upgraded the kitchen two years ago, and more recently the back porch.  The half bath is a must see!  In 2017 they purchased the lot next door to create a Victorian garden to compliment the backyard oasis of flowers they currently enjoy. 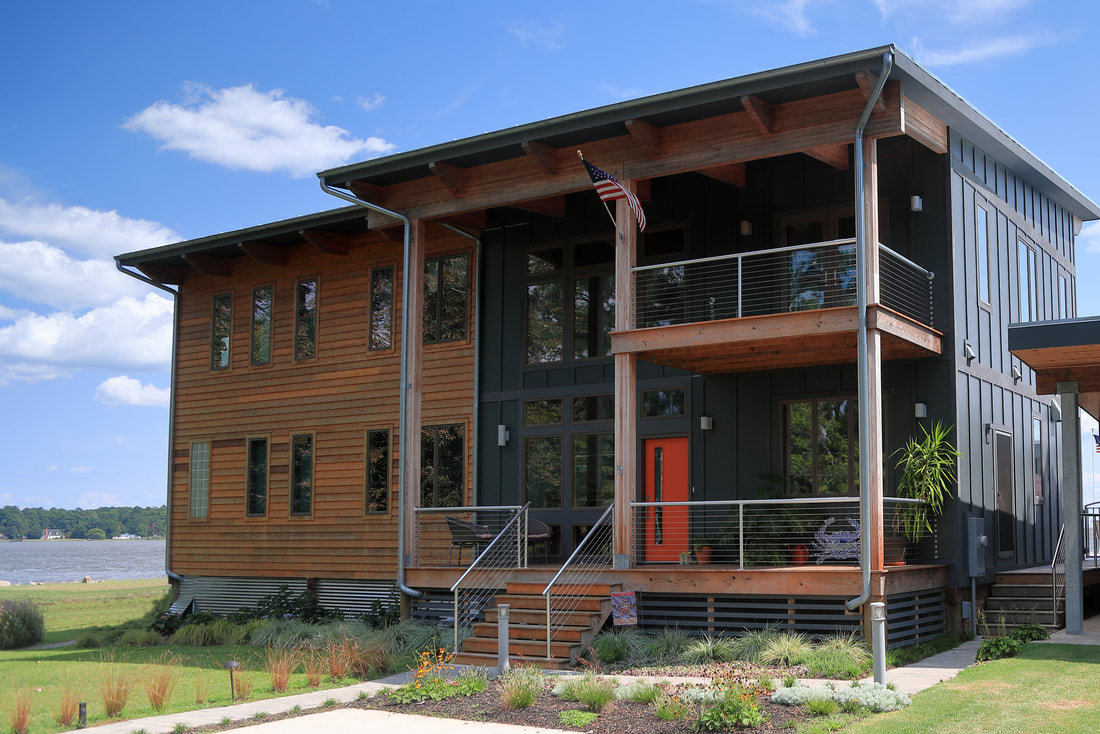 ​Built on the lot where he grew up, the contemporary house is the dream home the owner envisioned as a young boy erecting Lego block houses.  Built in 2017, its exterior is strikingly different from those around it, but even more different is the way in which it was built.  “We wanted this house to be as environmentally friendly as we could,” Mrs. Diggs proclaimed.  From the geo-thermal heating to the cistern collecting rain water for non-drinking uses, the house was designed to reduce the family’s carbon footprint. The house is situated on the lot to enjoy cross ventilation front to back and side to side.  But no matter how they situated the house, the focus is still the view of the beginning of the York River just 100 feet from their back deck and pool.  Tall glass windows across the rear not only provide panoramic river views but help complete the industrial feel of its interior.   The maple floors were reclaimed from the Dan River Mills and compliment the exposed beams, ceiling, and ductwork.  The walls are filled with original art from David Gill to James Ware to the owner’s mother’s watercolors. 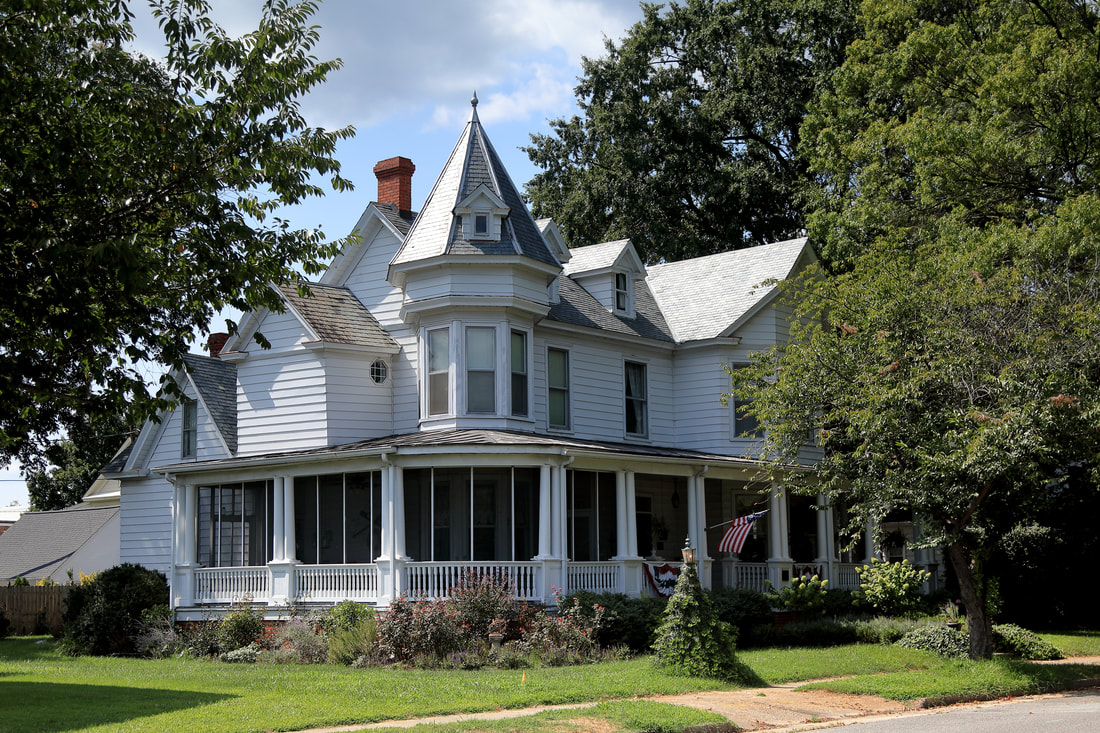 ​The stately Victorian house with the carriage house in the backyard was built on a foundation of oyster shells by J. W. Marshall, an oysterman, between 1901 and 1905.  It was modern when it was built with a safe built into the staircase, gas ceiling fixtures operated by wall switches, and a floor button underneath the table to summon the next course.  Over the years the coal fireplaces were covered with wallboard and a door labeled “Do not hang” was closed shut.  In the 1920s or 30s it became a funeral home and a room was added for embalming – a new technique at the time.   Several families have lived in the home since the 1950s when the funeral home moved.  The present owners bought the house two years ago and have brought new life to it.  The fireplaces have been uncovered; the embalming room became a bathroom; and the door was rehung with strange results.  Clever use of re-purposed old furniture is found in many of the rooms along with PGA memorabilia including a golf club owned by Bobby Jones.  Gardens and raised beds for vegetables abound under stately trees and the backyard Art Cottage is a retreat for their daughters. 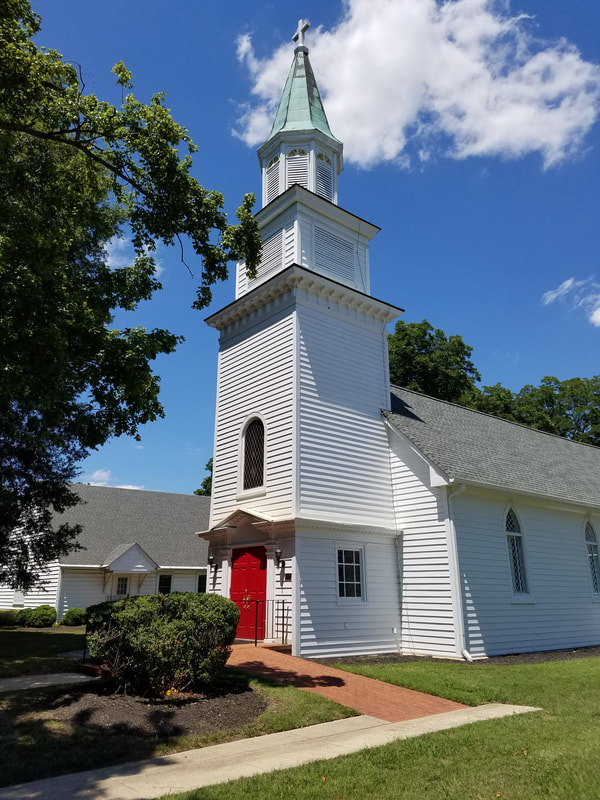 ​St. John’s Parish was founded in 1699 and in 1734 moved into a new brick building constructed approximately 10 miles northwest of West Point on Rt. 30.  Carter Braxton, one of the signers of the Declaration of Independence, was a member.  Following the Revolutionary War, the church disbanded and the colonial building was used by other denominations.  The 1734 building, still standing and owned by the Trustees of St. John’s of West Point, is now called Old St. John’s Church.   St. John’s congregation, within the town of West Point, began in 1879.  The present site was acquired in 1882, and a small church was built which remains the core of the present-day church building.  A massive renovation of St. John’s Church in 2011 began with the discovery of foundation and structural problems.   Restoring the original heart pine flooring and replacing the ceiling tiles with hard wood paneling have helped make this a breath-taking place of worship.  The church will be decorated with flowers to represent a wedding and there will be a tablescape in the Parish Hall to represent the reception held there.